If you think you have seen all the crazy toy robots doing all sorts of cool tricks then hold your breath and meet Joe Bot, another toy robot by WowWee. Although it is no way near its most capable ancestor Rovio but with excellent speed recognition ability and all sorts of crazy moves, you will wish to see it patrol all day long. 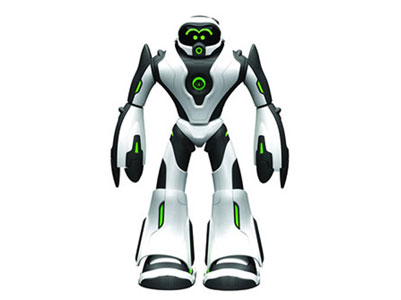 [asa]B002P4IFW4[/asa]
Stated by its manufacturer, the JoeBot is the first robot that can be controlled by voice commands. It has the ability to identify key phrases and respond to them in many possible ways. It can identify many different languages and this makes it a very popular toy robot worldwide. Joe Bot is full of hilarious comments and cartoon like voice that makes it the center of attraction not only for kids but even adults can throw a few comments and get surprised by the responses of this cool robot. The Joebot has a joystick hand which is used to set its mode and program this toy robot.

The Joe Bot has seven fun modes including dance, patrol, game, guard, beatbox, talk and conversation modes. It also features funny guard and battle mode in which it shoots at its enemies and obstacles with its LED guns. You will get all sorts of crazy sounds with this toy robot so be prepared for it.

JoeBot identifies obstacles in its way and smartly changes its direction to a flat terrain. You can even play one on one with this toy robot. Just take out any IR remote control then point and shoot and be prepared to receive the same response. Joebot will shoot back to you and when it receives hit it will slow down and sound in agony and pain, crazy enough to keep you busy till the batteries last.

This cool Joebot robot measures only 11.5L X 8.5W X 16.5H inches and requires 6 x AA batteries to operate. It comes with a complete user manual to explain how to make it work the way it is meant to be. Above all this is a great toy robot to buy for your kids over 8. In this Joe Bot review we have highlighted some of the key features but the Joebot has to offer a lot more. Overall we rate this cool robot 8/10 because of the features and low price we think its hard to find such a toy bot.