Flagship Samsung Phone is coming in Early 2011 with Gingerbread

It is expected that another great Samsung device is ready to launch in early 2011 which will be get the same success like this year’s Samsung Galaxy S series phone. The phone is named as Samsung Flagship and will be equipped with upcoming Android Gingerbread version. 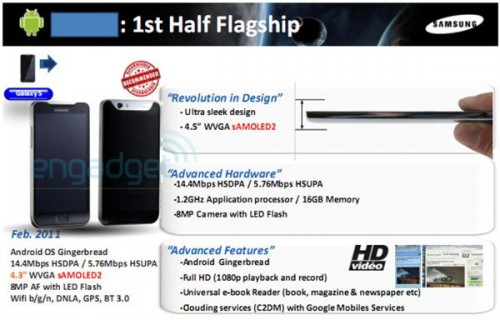 The Flagship Samsung phone will almost have the same display features as Samsung Galaxy S series have. Its leaked features include:

According to the news, the phone is designed with “ultra sleek design” and will be first announced at the Mobile World Congress tradeshow in Barcelona in early 2011 – February. In the above mentioned photo the design of phone doesn’t match with the so called design hence it may be the different phone and is only just for display image while the features showed in the image is exactly what is leaked and described above.