If you think that this is an ordinary wrist watch then you can surely add yourself to the list of others who also think the same. Besides being just a wrist watch, this dodgy watch by Power Disk has a built in MP3 player which will play lots of your favorite songs any where and any time. 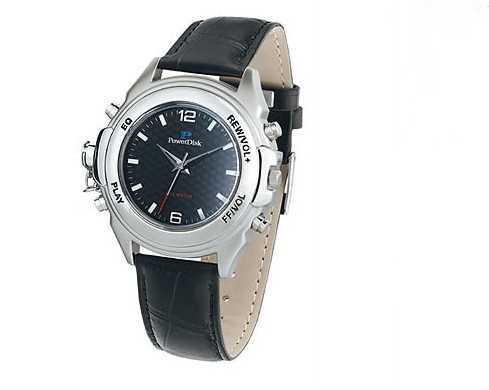 [asa]B00116X1CG[/asa]
This MP3 wrist watch by Power Disk is a classic looking men’s watch made for those who can not live without music gadgets. The wrist watch has an internal memory of 256 MB which is enough for storing up to 60 of your favorite songs. The watch also has a built-in rechargeable battery which gets charged via USB port. The battery provides up to 9 hours of playback time for this mp3 wrist watch.

This MP3 watch is compatible with both PC and Mac and can be connected to any computer via USB port by means of its USB interface cable. After being connected, MP3 songs can be downloaded to this MP3 wrist watch directly without the need of any other software.

This MP3 watch is also water resistant up to 10 meters and to further add to its features, it has also shock and skip proof technology. Songs can be listened via stereo headphones that are provided with this wrist watch. Another advantage of this MP3 watch is that it can also act as a stand along storage device just like those small sized flash memories.

Overall this is a nice gadget to have specially if you love music and would not like to be get noticed. We rate this MP3 wrist watch 6/10 because we think that an external memory card slot as an added feature would have extended the number of MP3 songs that can be saved on this cool looking wrist watch.