Many would not feel the need of a typewriter since the arrival of all sorts of geeky printers and computers but there are still many folks around who think that a typewriter is still very much in as thee offer the ability to type letters and reports all in a single unit. And an electronic typewriter such as this one really give the typing folks something to cheer at. 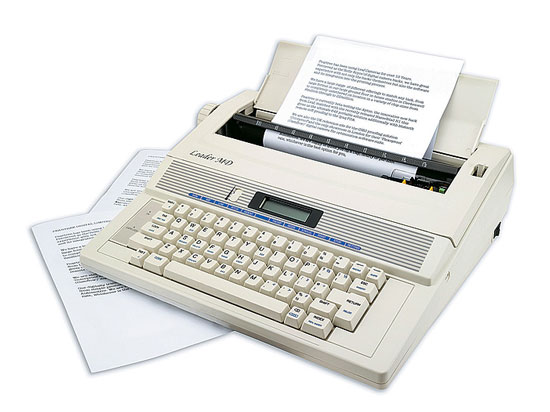 [asa]B00004WFZP[/asa]
This electronic typewriter less expensive than a PC / laptop plus a printer and it can be taken along any where you like. It is a very handy portable typewriter which is very easy to carry as it is not very heavy as compared to other conventional typewriters from the past. This typewriter is equipped with a LCD display and inside it lies a word processing unit which lets you type your complete notes and let you view them before you hit the print button.

This electronic typewriter only measures 4½” x 12½” x 15½” and has the capability to store 29,000 characters in its memory before printing. The LCD display scrolls all the typed phrases so you can double check them and eliminate any typo. Even if you miss a spelling mistake, the smart electronic typewriter will indicate it to you because its word processor also has a spell checker.

This handy electronic typewriter only requires 30 Watts to operate from mains power (UK). Overall this is a nice typewriter which will come in handy on lots of occasions and for printing some quick letters, journals and reports. Looking at the price, we rate it 7/10 because this is a real bargain price as most of similar electronic typewriters cost well over £300 and also take a lot more space than this one does.