How many digital photos frames have a touch screen and an MP3 player ? Now many but this 7 inch touch screen frame has it all. It is a digital picture frame which displays stored images just like any other way but is a lot more than just a photo frame. 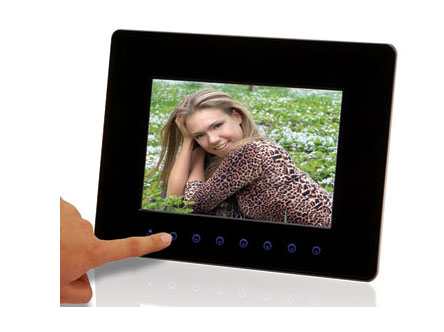 [asa]B000XG8WWY[/asa]
This digital photo frame has a 7 inch screen which has touch sensor controls i.e the controls are not visible unless you touch the screen with your finger or any other pointed object. The touch screen frame has a resolution of 800 x 600 with active display resolution of 720 x 480. Aspect ratio is 4:3 which is about the perfect proportion for viewing photos. This digital photo frame has an internal memory of 128MB which can be upgraded. It has a multi-card reader so this photo frame supports lots of memory cards including Compact Flash, Secure Digital, Memory Stick, Memory Stick Pro, Multi Memory Card, and Xtreme Digital etc. When the touch screen controls are activated, a total of 8 buttons appear as shown in the photo below. 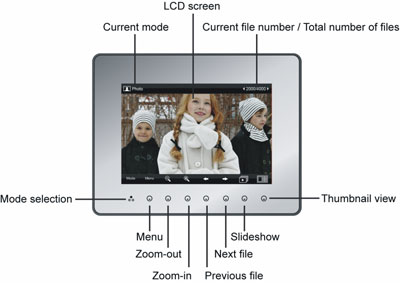 The ability to soon particular portion of a photo makes this is really cool touch screen frame and will turn out to be really fun in the hands of some not so GEEKY folks. The built-in MP3 player plays music files via built-in speaker. The touch screen frame has a smart photo resizing tool which automatically converts the photos in the perfect display size for this photo frame.

The digital photo frame has a rechargeable battery which is completely charged in 2 hours and when not connected to the mains power, it will continue to show pictures for almost 2 hours so you can use it as a portable photo frame and show your creativity to others.

The digital touch screen frame weighs only 575g and measures 205.9 x 160.2 x 95.7 mm (Length x Width x Height) when measured along with stand. When you purchase this 7 inches digital touch screen frame you will receive Unit with desktop stand, AC/DC power adapter, Built-in multi-format card reader, USB Cable and User Manual. We rate this digital frame 8/10 because we think that the touch screens is really a cool addition to such digital photo frames.