It is the thing of the past when you have to pay hundreds or even thousands of dollars to install a surveillance system to keep an eye on your belongings in your stores, houses or even outdoors. These were installed by professional people who usually hook up a bundle of cables around your place and make this who setup look quite obvious. With the introduction of mini cameras, the pinhole cameras, the size and cost of using such a system had come down drastically. The camera shown below is of similar type measuring only 2 x 2 x 1 inches and weighing only 8 oz. It is a full color wireless pinhole camera with a microphone. 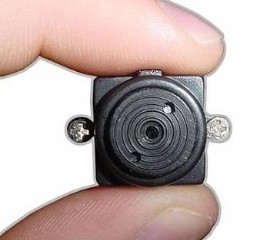 With its small size, it can be hidden anywhere you can fit it in. You can place it in a vase hidden in flowers or even put it inside a duct to get the top view.The ability to capture both video and audio makes this a really cook spy gadget. The camera runs or a 9V battery or adopter. Its function is fairly simple. This wireless pinhole camera captures both audio/video and transmit it via wireless radio signal to its receiver that can be as far as 500ft. The receiver can connected to a TV, a computer via TV tuner card or VCR.

This small sized Wireless Pinhole Camera is available at Amazon. It comes with all the installation accessories including stands, brackets, cables, adopters etc so it is a complete kit and you do not have to spend extra for anything else.